A 2014 Partners in Leadership study on workplace accountability revealed some contradictory results: 82% of respondents said they had no ability to hold others accountable, but about 9 out of 10 employees cited accountability as one of the top development needs they wanted to see at their organization.

Employees want to keep their peers accountable to the demands of their jobs, in the same way they want to recognize them when they do good work. But when employees have no system of accountability in place, things can very quickly fall apart. This is why accountability matters, and why you need to invest in it.

The phrase “mistakes were made” has been dropped by politicians so often that books have been written about it. It makes great use of passive voice, but it also speaks to a general lack of accountability in a system. Does the person uttering it want to cover their own skin, or are they part of a system that has no way of holding anyone responsible for their actions? Either way, it’s a cop-out. The phrase acknowledges problems only after they’ve been discovered, it holds no one responsible for them and it tries to move on from those problems without anyone actually having learned anything.

Why do I highlight this phrase? Because it’s a perfect example of why accountability matters. When employees (and let’s be fair, managers do this too) don’t hold themselves responsible for their actions, it prevents anyone from learning from them. This ends up perpetuating those problems until someone comes along and points these problems out. It also creates a culture of mistrust among employees.

For example, a 2013 survey found that 11% of managers said at least half of their employees avoid taking responsibility. Do half of employees really shrug off their mistakes? My point is that it doesn’t matter; what matters is that those managers believe they do, and that’s the distrust I’m talking about. That distrust will lead to bigger problems down the road unless something gets done. But what do we do about this?

Accountability Is a Culture Problem

I really can’t stress enough how much of a culture problem accountability is. When no one trusts each other to do the work they’re assigned, employee morale takes a hit. Employees feel like they can’t trust their bosses. They feel devalued. And when employees aren’t valued, they’re less likely to be engaged with their work; the American Psychological Association’s 2018 Work and Well-Being Survey found that 91% of employees who feel valued at their job are motivated to do their best, compared with 41% of those who don’t feel valued. So it’s a domino effect: Low accountability leads to mistrust, which leads to low morale, which leads to worker devaluation, which leads to low engagement, which leads to low productivity.

So the first step to creating more accountability in the workplace is to revamp your culture so that accountability fits within it. Make sure employees know that they’ll be accountable for their work by creating guidelines about how you’ll monitor their productivity. Set weekly goals and deliverables so that employees are motivated to complete tasks on a regular basis. Most importantly, make sure you’re following your own rules. Minda Zetlin offered some great advice: “Perhaps the best way to create a standup organization is to lead by example. Make sure employees understand what you expect of them, and that you’re holding yourself to the same high standard. Follow through on your promises, own up to your mistakes, and give feedback even when it isn’t easy.”

Earlier I mentioned the need to monitor employee productivity, but the idea is important enough to expand upon it. Just how do you track someone’s productivity? Do you monitor their every action, making sure they’re always on-task and getting results?

I wouldn’t advise it. Being on top of your employees like that is a recipe for disaster, and is likely to cause even more distrust in the workplace. No one wants to be micromanaged. Plus, the second you have to leave on business they’re back to their old habits. So it really doesn’t fix anything.

The key to accountability is to passively track work without being overbearing. Have employees create to-do lists (whether they write them down or you implement a software solution) for the things they’re directly responsible for. Then leave them alone. Autonomy can be a productivity booster in the right situation, and accountability means nothing without it.

When you’re micromanaging that’s not accountability. Part of accountability is responsibility. Let them make mistakes. If they’re slacking, give them feedback on it. If their lack of work is a consistent problem, that’s when you address it.

Accountability matters because not having it means no one can be held responsible. Creating accountability, then, is about creating a culture where people value responsibility, and where people understand that accountability involves a certain degree of autonomy. Accountability is important, but when implementing it into your workplace, make sure you’re giving employees as much as you’re asking from them.

This post was originally published in October 2015. It was updated in July 2019. 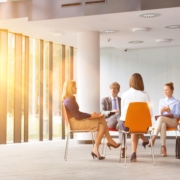