In 2014, Facebook came under fire after a study was published revealing that the social network was doing research on some users that use its platform. It was not only ugly the way in which Facebook conducted the research, but the assumptions the researchers made about the average user’s willingness to be emotionally manipulated were chilling.

In the study, “Experimental Evidence Of Massive-Scale Emotional Contagion Through Social Networks”, researchers Adam Kramer, Jamie Guillory and Jeffrey Hancock manipulated the news feeds of nearly 700,000 Facebook users. The goal was to see if manipulating news feeds could lead to what the researchers termed “emotional contagion.” Spoiler alert: the answer is yes.

The trust issues here are huge and point to the importance for all of us, all the time, to read those pesky Service and Data Use Policies so many web services throw on the screen with an “I read and accept the terms of this agreement” button on the first page of what is clearly going to be a lengthy document.

From a workplace perspective the issue is equally fraught. It’s standard policy now for employers to make employment contingent upon the candidate signing a variety of documents, including intellectual property assignments, social-media use agreements and non-compete agreements. There’s very little trust in the work world. Nevertheless, it is essential for employers to establish a work community where trust is a guiding principle and a shared responsibility.

One area where trust between employers and employees has visibly frayed is in the use of personal electronic devices cell phones, laptops and tablets, among other gadgets used in the workplace. For a small company it may not be a problem but many large, public and financial services companies either don’t allow employees to bring their own devices or make employees sign agreements to put security software on the device, agree to certain patterns of use and allow the company not to monitor employee data and wipe the device. A survey by Harris Interactive (sponsored by Webroot) had a number of interesting findings about the “bring your own device” policy, and its affects on trust. Three data points from the press release announcing the survey results are worthy of repeating, the first two from an employee point of view and the third from an employer’s perspective (these are taken verbatim from the release):

Employers being able to access employees’ personal data emerged as the top worry, with a majority describing themselves as either extremely concerned or very concerned about this

73 percent agree that employees should have some influence on software or security installed on personal devices used for work. The report is interesting, as is the infographic, and well worth a look.

I’ve argued here that trust is essential, and also a key component of influence. Others maintain that influence is unnecessary if there is a strong foundation of trust. I’m not convinced. In my work with employees, candidates and employers, I see trust and influence as having a reciprocal and constantly evolving relationship. Thus it is critical for employers to treat their employees as trusted partners in the enterprise. And it is critical for employees to be trustworthy and ethical, to maintain the employer’s trust.

On a practical level this is tremendously difficult. Businesses are not always trustworthy or ethical (Enron anyone?), nor are individual employees (um, Edward Snowden?). Trust is, then, a work in progress, something that requires a daily investment from all parties. How do you forge that link? By building a workplace culture that insists on, and rewards, trust. Can this be done with social media tools? Maybe.

Many workplaces don’t have a real-time “feed” of news and sentiment from all employees. Some may use wikis, blogs or enterprise software apps such as Yammer. Even those enterprises with robust Intranets, wikis and Yammer may not have the social listening skills necessary to watch the flow of information and interpret it correctly without violating the trust or misinterpreting the intent of the participants. One friend, for example, worked for a large multi-national company that used Yammer in an attempt to build a culture of trust and communication. But the company had proved itself untrustworthy in other ways, and few participated.

Trust can be breached early, often and sometimes both. Once the break happens it’s difficult to fix. So I’d argue don’t turn to social-media tools first to build trust in the workplace. Begin by building relationships, insisting on authenticity and acting quickly to head off conflicts that can erode trust.

As a leader in your company, let your employees know you trust them by giving them responsibility. This is the cornerstone of a culture of trust. And if you are an employee, work everyday to honor that commitment to you and earn trust anew. If you are fortunate enough to work within a workplace culture of trust, do everything possible to build on that foundation.

A version of this post was first published on entrepreneur.com on July 3, 2014 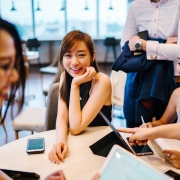 Cultivating Employee Trust in the 2020 Workplace

The Role of Communication in Employee Experience and Employer Branding HR Leaders: The Value of Climbing the Analytics Ladder
Scroll to top