Do you struggle to maintain concentration? Technology and its foreboding “nowhere to hide” mindset has certainly not helped. Thankfully, there are ways we can limit workplace distractions without having to abandon our smartphones.

Unlike most smartphone owners, I have not downloaded the app sensation, Pokémon Go. While I am typically first in line to consume pop culture, I’m familiar enough with my bad habits to know that the minute this game is uploaded to my phone, I would become obsessed to the point of atrophy. Case in point, I am still haunted by the wasteful Candy Crush summer of 2012.

My refusal to play Pokémon Go certainly puts me in the minority. A recent study from MFour Mobile Research, has found that a third of U.S. Android smartphone users have downloaded this game, surpassing Twitter as the most popular current mobile app. For those of you who are not familiar, Pokémon Go is a virtual scavenger hunt. Players explore the real world with their smartphones, hunting for 151 different cartoon characters at grocery stores, parks, and coffees shops. Did I mention that they are also playing Pokémon Go at work, as if our team needs another distraction.

Office workers are interrupted approximately every eleven minutes, academic studies have found. Once distracted, it takes an average of 25 minutes to return to the original task, says Gloria Mark, a professor of informatics at the University of California.

Another study, published by Carnegie Mellon, measured the amount of brainpower lost when someone is interrupted. Two subject groups were tasked with reading a passage and completing a test—one merely did the assignment, while the other was told they “might be contacted for further instructions” at any moment via instant message. When the second group thought they were going to be interrupted but weren’t, they were 14% less likely to answer correctly. When they were interrupted, their scores dropped another 6%.

Distractions steal our time, hurt our productivity, impede our creativity, and damage our efficiency. Even worse, many of our distractions are our own fault, making them wholly avoidable. Larry Rosen, author of iDisorder: Understanding Our Obsession with Technology and Overcoming Its Hold on Us, states that these self-induced distractions are becoming more prevalent and difficult to manage. There is a compulsion to check email, text, social media, and games like Pokémon Go. “We might be in the middle of a meeting but if we don’t check in we start feeling anxious,” Rosen says.

To effectively manage self-inflicted interruptions, we must build our ability to concentrate and minimize distractions. Here are a few tricks that (along with discipline) may work:

Don’t fall victim to the Pokémons lurking around each corner. They want to break your concentration and take you off task. If you can control the urge, you remain the hunter; however, if you succumb to their temptation, they are now hunting you. You and your team do not have to become prey to a bunch of pocket monsters. Fight the distractions so you can spend time on things that really matter… like Tetris. 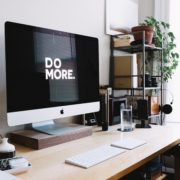 #WorkTrends: How to Make Your Organization Accessible for Everyone