“The rung of a ladder was never meant to rest upon, but only to hold a man’s foot long enough to enable him to put the other somewhat higher.”  Thomas Henry Huxley

Life doesn’t always turn out the way you expect.

After my brother, Scott, graduated from college with an accounting degree, he opened an eyeglass store with a partner. They employed a full-time ophthalmologist, and business was booming. A few years into it, Scott became intrigued with the idea of becoming an eye doctor himself, so he went back to college to pursue a degree in medicine.

He applied to several ophthalmology programs, but he could not get accepted — no matter how hard he tried. Yet he didn’t give up. He studied hard, retook the exam and tried again. No dice. Finally it dawned on him that he may be pursuing the wrong path, so he explored other areas of medicine.

Shadowing a friend who was a podiatrist, Scott found that he loved the field of podiatry. He pursued it, effortlessly got into a program, graduated, and after years of hard work is now a partner in a successful surgical practice. He developed two implants that were approved by the FDA, and the company and his practice are growing like wildfire.

My brother could have gotten comfortable with his original plan and led a pretty good life. The eyeglass store was doing well — why should he do anything else? He couldn’t get into ophthalmology school — so why not give up on medicine altogether? He still had his accounting degree to fall back on. Each time he “failed,” he made the decision to climb the next rung on the ladder, challenging himself every step of the way. This has made all the difference.

In today’s economic environment, many people are holding onto their rung for dear life. Even though they don’t have the career they dreamed about — they may not even LIKE their current job — fear and inaction keep them stuck. Over time, one of three events is likely to occur:

If you feel like you’re stuck in your current position, now is the time to begin to take action to become the person who gets promoted. In his article “Get Noticed!,” Alan Hall shares four steps to climb the corporate ladder. These actions include: be innovative; make recommendations; raise your hand; and support and mentor your fellow peers. Recognition and achievement comes to those who are willing to do what it takes to be successful.

Is it time for you to climb to take it to the next level in your career? Think about one thing you can do today to move yourself to the next rung. Our journey on the ladder of life will never end. It’s the climbing that is the fun part. Enjoy the ride.

P.S.: Sometimes our hand slips and we fall down a few rungs, it’s all good. It makes us that much stronger when we continue to climb and see what lies ahead.

As Founder of Grategy, Lisa Ryan works with organizations to create stronger employee and customer engagement, retention and satisfaction. Her proven gratitude strategies (Grategies) lead to increased productivity, passion and profits. She is the author of seven books, and co-stars in two documentaries: the award-winning “The Keeper of the Keys” and “The Gratitude Experiment.” To learn more, visit www.grategy.com. 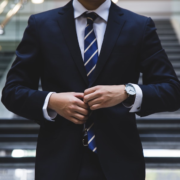 #TChat Recap: The ROI Of Workplace Transparency
Scroll to top