Bad Culture makes for an unhappy you

Company culture and cultural fit can have a huge impact on your day-to-day happiness.  Being able to identify when a culture is turning bad, and what you can do about it are crucial skills for managing your career happiness.

How do you identify a Bad Culture

When behaviors within a company that are accepted or celebrated lead to conflict and strife, you’ve got a bad culture on your hands.  Lots of things that can create a bad culture, but all of them can be summed up by three factors.

When an employee or group perceives either a lack of fairness or a lack of respect in treatment from co-workers or managers, you’re going to have problems. If the perceived lack of fairness/respect continues beyond a “one-off” occasion, the issue can become systematic, at which point it becomes a culture issue.

In short, when people in an organization feel like they are routinely being treated unfairly, or are being disrespected, you have a culture problem.

An example of unfair behavior would be a boss that insists everyone stay at the office until 6pm, but allows herself to leave early to go golfing twice a week.  A company with a culture that fosters a lack of respect might allow different departments to undermine each other in bids for power.  Both situations will reduce a company’s productivity, but more importantly, it’ll make going to work a lot less fun for everyone.

If a company lacks either a formal or informal way for its members to talk to each other, you have a formula for breeding mistrust.  When people get upset, angered, frustrated, or even just confused, and they have no way of clearing the air, problems start to fester.

There’s often a lack of dialogue in environments where people don’t feel it’s “safe” to address negative issues (i.e. addressing the issues will result in negative consequences).  Without dialogue misunderstandings turn into mistrust and honest disagreements turn into infighting. 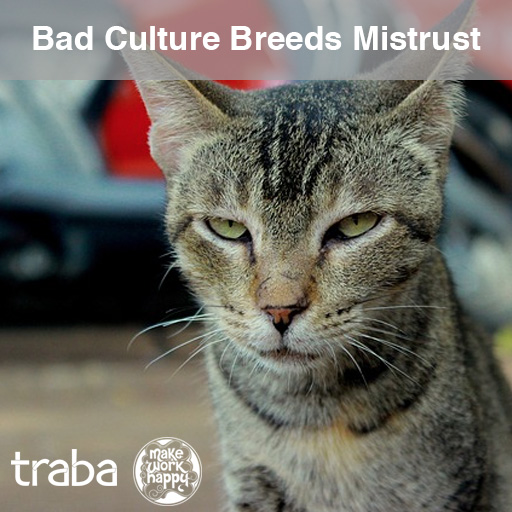 A lack of dialogue doesn’t just cause problems in terms of interpersonal issues.  It creates very real decision making problems.  If managers and workers aren’t talking to each other, or don’t feel safe bringing up new ideas, your company is going to suffer.  Cultures with limited dialogue, can make it almost impossible for the best ideas to see the light of day.

Sometimes the culture of a business isn’t necessarily bad, but it might be a bad fit for you.  The company might need its workers to follow an exact written process in order to maintain quality, but you may be looking for autonomy and freedom in decision making.  In that case, you are not a good fit for the job.  If that fundamental misalignment is not recognized, you’re going to have a culture conflict.

Alternatively, You might be young and single so staying late to work on projects and strolling in at 10am might be what works best for you.  But if everyone in your office has kids at home and wants to leave at 5pm sharp to be home for family dinner, the culture of your office might not be a great fit for what you need.

How you deal with a bad culture effectively comes down to two choices: Fight or Flight.  Here are two things you should analyze before you make your choice.

If you don’t know what’s triggering a bad culture, you can’t fix it.  Figure out if your culture issue is being triggered by one person, conflicts within groups, conflicts between groups, bigger factors out of everyone’s control, or maybe even you.

Sometimes the issue is a bad manager or partner. Sometimes your company has had friction and mistrust between groups that has existed for years.  And sometimes everyone is just so disengaged that nothing is getting done.

Diagnose the cause of your company’s culture issue, then assess your ability to impact change.

Understand your ability to affect change

Sometimes your ability to affect change is limited.  If you are a low-level employee affecting widespread culture problems is nearly impossible.  The good news?  If the cultural problem you’ve identified is limited to a single group or a single individual, making a positive impact can be easier than you think.

If the problem is limited to one individual you can try direct dialogue.  Talk to the person about how the negative consequences you are seeing and try to understand their perspective.  If direct dialogue isn’t working, you should get advice from HR on how you can address the situation constructively.

If the problem is a team dynamic, make sure you understand the perspective of each of the key players.  Don’t judge, just listen.  If you can build trust between yourself and each of the parties in conflict, you can start to act as a mending bridge.

I’ve found these two books to be tremendously helpful resources when attempting to tackle cultural issues:

by Kerry Patterson, Joseph Grenny, Ron McMillan and Al Switzler is a great book for understanding how to deal with difficult conversations and breaking down what triggers the anger and fear that stops us from changing our own behavior.

by the same group of authors who wrote Crucial Conversations (along with David Maxfield).  It helps you breakdown the difference between managing through influence and managing through control, which are key skills for influencing culture, since most of the time you won’t have direct positional power over the people you need to influence.

Sometimes you just have to leave

If you aren’t a fit for your company’s culture, or the factors influencing the company’s cultural problems are too widespread for you to affect from your position within the company, sometimes it’s just be best to look for a new place to work.

Life is short.  Too short to not love the place you work.

(About the Author: Michael Flynn is a graduate of Duke University’s Fuqua School of Business and has experience working in Brand Management, Product Management, and Digital Marketing for companies ranging in size from Fortune 500 publicly traded companies to bootstrap startups. He has above average hair and is now the Head of Marketing at Traba.)

Creating an Environment That Encourages Women in Leadership
5 replies