Have you ever gotten a job by uploading your resume to an online application portal? I haven’t and I don’t know anyone who has. You could be the answer to an employer’s prayers, but if you don’t know how to appease the algorithm—by, say, using a sans-serif font like Verdana instead of a serif font like Times New Roman (for years the resume standard)—you’re sunk.

As if writing your resume for a human audience weren’t challenging enough, you now have to write it for an audience both human and robot.

The designation “black hole” comes up again and again in complaints from recruiters as well as candidates—when you upload your resume into an applicant tracking system (ATS), it’s sucked into the void. My hero, Liz Ryan, inventor of the Human-Voiced Resume and a longtime HR executive, puts it this way: “You’re better off putting a stack of paper resumes on the passenger seat of your car and driving down the freeway with the window open. One of the resumes from your stack might fly out the window and land on a hiring manager’s desk.”

Once your resume is swallowed by the gaping maw, it’s anyone’s guess where it goes. Where it almost certainly does NOT go is the desk of the person you want to be your next boss. There is a way around this, however; write a letter.

Skip the resume abyss for now and write a letter directly to the person you want to be your next boss. Even if you’re not able to open with something like “Peggy Olsen suggested I contact you,” write a letter. Even if there’s no job opening at your target company, write a letter. In fact, there’s a hidden job market chock-full of positions that are never posted.

Jobs can also be created. It happened to me. I approached the woman I wanted to be my next boss at a UCLA extension course—her scheduled appearance on a panel of industry big wigs was the reason I took the course. During a break, I marched up to her and delivered my (finely honed) pitch. She asked me to send her my resume and a letter reiterating what we’d talked about.

In the letter I sent her, I reiterated who I was and what we’d talked about, but I also took the opportunity to tell her what I could do for her—I knew what she needed done because I’D done my homework. Before you network, network, network, you must research, research, research. I’ll get you started; here’s a great article from the aforementioned Liz Ryan called “How to Reach Your Hiring Manager Directly.”

I told the woman who would become my next boss that I understood what she and her team were going through, then gave her a couple of examples of how I’d successfully confronted the same issue for my previous employer. Liz Ryan calls these “pain letters,” because they say to the person you want to be your next boss, “I feel your pain. I know how to relieve it. Here’s how I did it for my last boss.”

Once you’ve arranged a meeting, if necessary, you and your next boss can figure out how best to get your resume through the ATS. Or not. When someone is champing at the bit to hire you, it’s amazing how easily the system can be circumvented.

Truth be told, you could study up on how to beat the resume-submission robots—there are plenty of tricks online—and still not be able to penetrate the fortress. Or you could write a letter. On paper, stapled to your resume, unfolded in an 8.5 x 11 envelope. How much email do you get in a day? How much snail mail? If you want to stand out, sometimes “ya gotta kick it old-school.”

Don’t get me wrong—I love robots. They’re terrific for surgery, weaponry, manufacturing, even hunting and killing jellyfish, but when it comes to finding you a job, don’t be surprised if all they have to offer is “Warning! Warning! Alien spacecraft approaching!”

A version of this post was published on Creative Profiles Inc.com on 12/4/2015. 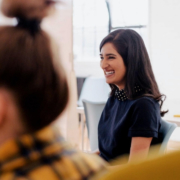