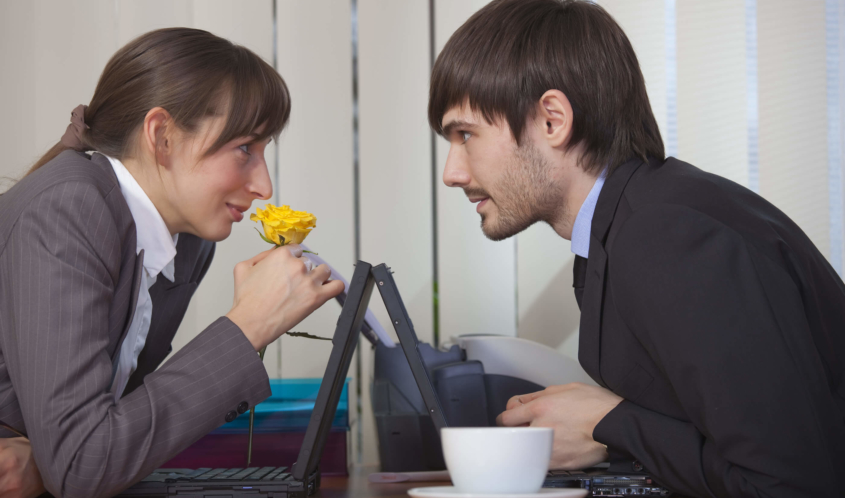 Dating someone you work with is frequently cited by workforce experts as a very bad idea. Yet 40% of workers admitted they did so in a 2013 CareerBuilder survey – and we have no reason to believe that number has gone down since then. As summertime rolls around, inevitably relationships will begin to spring up. After all, the average working American spends one-third of their lives at the office. So, what does the burgeoning office relationship mean for employers? Relationships gone sour have the potential to raise tension in the office. Couples that practice ODA (Office Display of Affection) make other employees uncomfortable. And there are bigger stakes for the employer.  The way you handle a new romance can expose the entire organization to risk or result in a great relationship you helped cultivate.

There are no hard rules when it comes to fraternization policies – but it is necessary to have something in place to guide appropriate behaviors.  Yet only 42 percent of companies have intra-office dating policies. These policies protect the company as well as the two individuals involved.  Make sure every person in your office understand the rules and how to report relationships should they become serious.

Some HR departments require written disclosures, making the involved employees officially state their relationship. Other companies “ban” fraternization. This is extremely hard to enforce because the term “fraternization” is difficult to completely define and policies that ban fraternization don’t really work. It seems great on paper, but it doesn’t account for the human condition. Your employees will date someone if they want and assume as long as they don’t display affection, no one would find out. That’s not a safe route for anyone in the office and can disrupt productivity and exclude other employees. It is best to keep HR and the supervisor in the loop to avoid your workers spending all their time trying to “hide” their relationship.

“More and more companies have implemented policies because they realize they aren’t going to stop people from having romantic relationship,” said Christine Amalfe, an attorney in Gibbon’s P.C. litigation and employment and labor law departments. Amalfe is correct, there are very few workplaces wherein HR or any other executives can forbid dating between coworkers. Nor would it be a reasonable policy.  However, if everyone on your employee relations team is briefed on the rules and communicates them to the team, both employees and management can breathe easier knowing how to deal with potential relationships.

“If you’re considering dating a coworker, finding out what the policy is before you initiate a romantic relationship will typically be better than springing it on your bosses six months in,” Eric Ravenscraft of lifehacker.com said.

What if the relationship ends? Even if the relationship leads to a marriage, 44 percent of every marriage in the United States ends in divorce. Employers have to deal with couples who can’t work together even though they have to work together. Failed relationships in the workplace damage morale and the individuals risk losing their jobs. Have a contingency plan if the former lovebirds can no longer bear to work together. It DOES happen and it is important to make succession plans and keep performance reviews up to date in case reporting is called into question.

If office dating happens, it should only happen laterally. Dating subordinates is a bad idea – period. Some companies allow dating coworkers as long as they are not your boss. But 99 percent of organizations get it right and ban intra-office relationships between supervisor and subordinate. It can compromise credibility and lead to subordinates disrespecting their supervisors.  It is also scary territory for potential legal action. Sexual harassment, favoritism, and other risky situations can all easily arise from a situation in which two people from unequal positions are involved in a romance.

“When a supervisor and employee are dating, it can potentially decrease morale in the department and raise suspicions by coworkers of preferential treatment,” said Kristin Bowl, spokeswoman for the SHRM. According to EEOC, one-in-four women are sexually harassed at work, half of them were harassed by a supervisor.

Companies who have a no tolerance intra-office dating policy try to control human nature. In reality, however, if employees want to date, they will… you may just not know about it until it starts to impact your work environment. The best policies are the ones that don’t ban the behavior. Don’t try to control human nature, guide it. Give employees guidelines for office dating: don’t date your boss, sign a relationship contract, etc. Workplace dating is inevitable. Intra-office dating is going to happen. You can’t prevent sparks from igniting, but you can avoid a legal flameout.

(About the Author: Deborah J. Muller is the CEO of HR Acuity, a technology firm specializing in human resources applications like the HR Acuity On Demand family of applications. Muller brings more than 25 years of human resources and investigation experience to both the consulting practice and software development sides of the company.)

The Resiliency of Wishing Them Well
Scroll to top