At this time in our nation’s history it is pretty clear how language and behavior can cause great schisms between groups of people. Divisions that separate us by gender, race, age, socioeconomic class – there seems to be no end to the ways that we find ourselves divided – have become visible. Sometimes these divides are created with intent, sometimes unconsciously.

There are, however, bright spots and groups of people working towards unity. We will only get there by refusing to create the ideology of otherness. In order to dissolve the constructs of otherness, we must understand it. Sociology.com defines it for us:

The idea of ‘otherness’ is central to sociological analyses of how majority and minority identities are constructed. This is because the representation of different groups within any given society is controlled by groups that have greater political power. In order to understand the notion of The Other, sociologists first seek to put a critical spotlight on the ways in which social identities are constructed. Identities are often thought as being natural or innate – something that we are born with – but sociologists highlight that this taken-for-granted view is not true.

Breaking Down Otherness At Work

The key to breaking apart the state of otherness is to know each other in a human way. In the business world many different groups are working towards making our workplaces more diverse, which can help heal our whole society. Think about it – if you work 40 hours a week you will more than likely get to know your coworkers on a human level. If the key to breaking down your own biases is getting to see people that you may unconsciously see as “other” as individual human beings. Working alongside someone who is different than you, whether that be by race, gender, sexual orientation, speech-language disorder, or any other disability or disorder, will eventually let you see them as simply human (if you want to).

Building a diverse workforce is easier said than done, even though studies have shown that diverse workplaces are more engaged, more productive, and more profitable. In many studies Gallup found that:

Engagement and inclusiveness are closely related. Gallup has also found that engaged employees are more likely to say their company values diverse ideas. Furthermore, engagement is also linked to how an employee feels his or her employer would respond to discrimination concerns.

For the concept of Otherness to be broken down, the leaders of your company must want to eliminate workplace discrimination if it is going to happen. From the top down, all parties must have skin in the game.

A Story of Otherness

Recently one of the members of our community was let go by his employer in an unsettling way. After a mistake on a project, he was told he would be suspended for a few days, but that he must turn in his credentials and laptop for that one day. It was a Friday. On Monday he was told over the phone that he was not to return to work, told he would be offered severance, and fired.

This individual has a speech-language disorder, but that is not the unsettling part. What led up to the firing is. Only after his firing did we learn that he had little to no communication with his manager. She regularly avoided or canceled their scheduled one on one meetings. He worked steadily, and effectively, but almost always alone due to the nature of his job.

After his dismissal, he received a letter of sorrow and thanks from a different supervisor saying how sad he was that our member had quit his job, and that certain projects would never have been successful without him.

What you may see here is what may be a wrongful termination. But look deeper and you will also see the creation of a state of Otherness for our member. He was not engaged by his supervisor, he was left off and alone to work, separate from his co workers.

This type of scenario is repeated again and again throughout companies, even companies that set up diversity initiatives to hire for that very reason. The “Other” employee comes into the company, but is never made to truly feel like part of the culture. Their Otherness is ever visible, and very often, so uncomfortable they choose to leave. Or they are dismissed like our member was.

True diversity will not be built without tremendous effort from leaders within business. And it won’t work if leaders attempt to build it in silos. Diversity must include both a culture change and the awareness that all “categories” of people whether it be race, gender, sexual orientation, anyone with a disability or communication challenge, cannot be set apart and meant to feel like they do not belong to the mainstream. The company that lost our member lost a very bright, hard-working young employee. Many businesses, by pushing people who are in any way different than the majority group into an “Other” state, stand to lose the same kind of outstanding employees, the ones who will help build a diverse and engaged workplace. 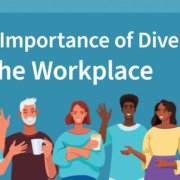