I once had a conversation with the set drummer of the Boston Pops Orchestra. I will indulge in some grandiosity to make a point: The Boston Pops Orchestra was, at the time, the most famous and successful orchestra in the world. They had sold million of records, due in no small part to their “pop” music recordings, and this guy . . . this one guy . . . was the rhythmic heart and soul of that massive success.

We were on a bus going to a concert out of town, and it just so happened that the only seat left on the bus was the one next to this guy, so there I sat. To break the awkward silence (I was the new kid at the time), I started telling him about a new spartan practice regime I had instituted. I talked about how I was pushing myself to the highest level of metronomic and rhythmic precision I could.

I worked with this guy for 20 years and this was the only conversation I ever had with him, but it was a doozy. He looked at me with ill-masked condescension and said, “Control is essential, but precision alone has no value. The whole idea is play a little ahead of the beat or a little behind it. That’s what gives the music its ‘color’ and its emotional impact.”

When I talk about the culture-shock experience of playing in major orchestra, this is a perfect example. Here, in just three sentences, this guy basically refuted, with flawless logic, everything I had learned about time and timing in industrial school culture: the constant blind emphasis on always being right on time, never be late or behind, and always obeying the timing of a machine called a clock.

The way we traditionally think about time and work is obsolete. When you get away from doing purely physical labor, time ceases to work the same way. It’s like Newtonian physics no longer working with subatomic particles at the speed of light. One example, in a recent report on 60 Minutes, Steve Kroft explained how high-frequency traders do something called “front-running.” Simply stated, by accessing slightly shorter fiber optic cables that let them see stock market orders three milliseconds ahead of everyone else, they can see your order before it hits “the market” and buy the stock you have ordered a millisecond ahead of you. That way, they can then sell that stock back to you for a penny more than the price you thought it was going to be.

A penny doesn’t sound like much, but if you do that hundreds of millions of times an hour, it adds up. To tens of billions of dollars. It’s normally illegal, but not in this context. In this case, it was a millisecond of timing, not large amounts of time, that was money.

We have all heard the phrase “time is money.” Many of you have heard the phrase “money is emotion.” But here is one you may not have heard: time . . . is emotion. All the emotions expressed by music are expressed and evoked by subtle manipulations of time. Everything you do has a different emotional impact depending on how fast or slow you do it. If a customer feels rushed or bored or disrespected, that is almost always a timing issue. Taking too much time to help a customer is just as bad as taking too little.

The trouble is, the shame and fear of modern life messes with your emotions, and thus with your sense of time and timing, in a major way. I have met people — brilliant people — who have lost all connection to their inner sense of time. They can’t find the “one” in a four-beat bar. Have you ever watched such people try to dance? Sad. We live in an emotionally “numbed up” society, and that means our sense of timing is all numbed up too.

Industrial time management is very crude, and is based on people working like machines. It is all about “duration” equaling value. This is no longer the case. If a child learns x amount in six hours of school, that does not mean they will learn twice as much in 12 hours, but many people who think in terms of industrial machine-based time think this is the case.

Interestingly enough, the stock market “front-runners” were defeated by slowing down the flow of information, not trying to go faster. This sounds crazy to industrial time thinkers, but to a musician, or anyone who has achieved calm mastery, it makes perfect sense. Going slower gives you more control, and sometimes slower or slightly behind is just better period.

Time is not a god to worship, and it’s not something that sits on a pallet in the loading dock. It is, in essence, a medium of artistic expression, for good or for ill; as we escape from factory life, we are all on the verge of a renaissance in the workplace, going back to where we will all be less like cogs and more like unique craftspeople and artisans. We will have far more artistic/emotional expression in our daily and working lives, not constantly suppressing it to achieve greater speed, as that will be the only value we will have to offer after the robots and computers take over all the repetitive tasks.

After a century of our workplaces being ruled by a machine called a clock, the digital era has made time-duration-based measurement of work meaningless. The post-industrial world is still struggling to comprehend this, as these old industrial era traditions — of seeing emotions as a drag on efficiency, rather than both the basis of money (trust) and core of the economy (unmet desire) — dog us endlessly. Rethinking — or perhaps we should say re-feeling — how we look at time is key to making this transition. Time is not a constant. It flies by or drags on forever depending how we feel at the moment. Timing, not time, is money.

Justin Locke is a freelance writer, playwright, coach, consultant, and speaker. He is the author of Principles of Applied Stupidity, a pragmatic guide on how smart people can take advantage of the Dilbert Principle, and Real Men Don’t Rehearse, a laugh-out-loud memoir of playing bass in the Boston Pops. In his books, workshops, and presentations he shares an amusing artistic perspective on the challenges of management, and just coping with life in general. Visit his website at www.justinlocke.com. 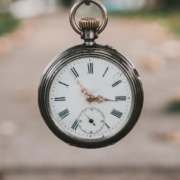