“When you pay attention to boredom, it gets unbelievably interesting.” —John Kabat-Zinn

Boredom is something most of us try to avoid at all costs, and thanks to today’s vibrant entertainment industry there is usually no shortage of activities to keep us occupied from the time we wake until the moment our head hits the pillow at night.

Work, however, is one place where tedium is often difficult to avoid, but new research shows that this may not necessarily be a bad thing.

Recently, psychologists Dr. Sandi Mann and Rebekah Cadman from the University of Central Lancashire (United Kingdom) discovered that activities that are typically seen as boring, such as data entry or attending staff meetings, may help us to become more creative.

In one experiment, people were asked to come up with different uses for two polystyrene cups. But first, half of them were given the rather dull task of copying numbers from a telephone directory.

As you might expect, those who had initially busied themselves copying telephone numbers developed more creative ideas for using the cups than those who hadn’t.

In another similar experiment, people were again asked to complete a creative task, but this time, some of them were told to read out numbers from the telephone directory rather than writing them down.

As in the first experiment, those who hadn’t completed any task at all were less creative, but those who had read out the numbers were even more creative than those who had written them out.

This suggests that the more passive a boring activity is, the more room there is for creativity to flourish. For example, reading allows the brain to wander, which enhances creativity, but a more engaging activity like writing reduces the scope for daydreaming.

Other studies have shown that students with a tendency to daydream are often better learners, and although it is often seen as the result of a lack of discipline, daydreaming is actually a sign of a healthy and active mind.

What these findings mean for you

These findings are particularly valuable to those who work in creative industries like writing, film or music, but anyone can benefit from letting their mind wander once in a while.

By allowing yourself to be bored instead of trying to find some activity to fill the void, you’re actually giving your brain a chance to explore new possibilities and come up with ideas.

Some of the world’s most famous writers worked at tedious jobs all day, and then went home in the evening to create their masterpieces.

Stephen King worked as a high school janitor before he was published, and he actually thought of the concept for his first novel “Carrie” while cleaning the girls’ locker rooms.

Anne Rice was an insurance claims examiner before her now classic novel “Interview with the Vampire” was published, and Douglas Adams, author of “A Hitchhiker’s Gide to the Galaxy,” said the idea for his book came to him while he was moonlighting as a hotel security guard.

So if you’re in the habit of checking your Twitter feed or heading to the nearest coffee shop the minute boredom hits, you may want to hold off and endure it for while – that is, if you don’t want to miss out on your best idea yet. 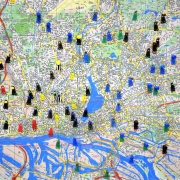 The Surprising Reality Of The Working Dads Movement Wanted, Preferably Alive And Having Fun With Your Company Culture
Scroll to top